From DNSAdmins to Domain Admin, When DNSAdmins is More than Just DNS Administration

At DerbyCon 8 (2018) over the weekend Will Schroeder (@Harmj0y), Lee Christensen (@Tifkin_), & Matt Nelson (@enigma0x3), spoke about the unintended risks of trusting AD. They cover a number of interesting persistence and privilege escalation methods, though one in particular caught my eye.
Overview
Lee figured out and presents a scenario where there’s an account with unconstrained delegation configured (which is fairly common) and the Print Spooler service running on a computer, you can get that computers credentials sent to the system with unconstrained delegation as a user. 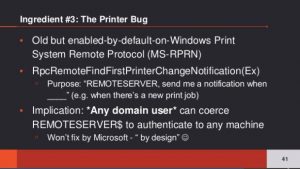 The Attack
The attacker discovers a system with Kerberos unconstrained delegation and compromises it. Then the attacker sends a “RpcRemoteFindFirstPrinterChangeNotification” request to the Domain Controller and the DC responds to test communication to the requester.  If the Domain Controller is running the Print Spooler (Spooler) service, this will work (and it’s trivial to test to find 1 DC that is running this service).

Lee explains that the issue is that any authenticated user can remotely connect to the Domain Controller’s print server (spooler service) and request an update on new print jobs and just tell it to send the notification to the system with unconstrained delegation. It will test that connection immediately thus exposing the computer account credential (since the print spooler is owned by SYSTEM). Lee notes that Microsoft says this is by design and “won’t fix”.
Lee posted PoC code he calls SpoolSample on Github.

The conceptual auth flow is shown in the  graphic 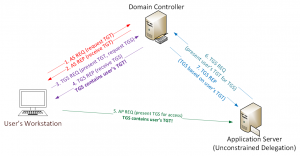 The key “ingredients” required for this to work as mentioned in their talk:

Note that this post focuses on Domain Controllers, but any server is potentially at risk to this attack.
Mitigate this specific issue by disabling the Print Spooler service on all servers that don’t need it running and ensure there are no accounts with unconstrained delegation configured.

UPDATE ( Feb 12, 2019)
Microsoft has released some additional guidance for the cross-forest impact of this issue.

UPDATE (March 21, 2019)
Microsoft has changed this to CVE-2019-0683 and will fix.  The Microsoft article 4490425 describes the changes to trusts moving forward to protect against this issue.