Kerberoasting can be an effective method for extracting service account credentials from Active Directory as a regular user without sending any packets to the target system. This attack is effective since people tend to create poor passwords. The reason why this attack is successful is that most service account passwords are the same length as the domain password minimum (often 10 or 12 characters long) meaning that even brute force cracking doesn’t likely take longer than the password maximum password age (expiration). Most service accounts don’t have passwords set to expire, so it’s likely the same password will be in effect for months if not years. Furthermore, most service accounts are over-permissioned and are often members of Domain Admins providing full admin rights to Active Directory (even when the service account only needs to modify an attribute on certain object types or admin rights on specific servers).

Tim Medin presented on this at DerbyCon 2014 in his “Attacking Microsoft Kerberos Kicking the Guard Dog of Hades” presentation (slides & video) where he released the Kerberoast Python TGS cracker.

This is a topic we have covered in the past in the posts “Cracking Kerberos TGS Tickets Using Kerberoast – Exploiting Kerberos to Compromise the Active Directory Domain” & “Sneaky Persistence Active Directory Trick #18: Dropping SPNs on Admin Accounts for Later Kerberoasting.”
Also Will Schroeder, aka Will Harmjoy (@harmj0y), and I spoke at DerbyCon 2016 about how to Kerberoast to escalate privileges.

Note: This attack will not be successful when targeting services hosted by the Windows system since these services are mapped to the computer account in Active Directory which has an associated 128 character password which won’t be cracked anytime soon.

Let’s quickly cover how Kerberos authentication works before diving into how Kerberoasting works and how to detect Kerberoast type activity.

1a. Password converted to NTLM hash, a timestamp is encrypted with the hash and sent to the KDC as an authenticator in the authentication ticket (TGT) request (AS-REQ).
1b. The Domain Controller (KDC) checks user information (logon restrictions, group membership, etc) & creates Ticket-Granting Ticket (TGT).

2. The TGT is encrypted, signed, & delivered to the user (AS-REP). Only the Kerberos service (KRBTGT) in the domain can open and read TGT data.

3. The User presents the TGT to the DC when requesting a Ticket Granting Service (TGS) ticket (TGS-REQ). The DC opens the TGT & validates PAC checksum – If the DC can open the ticket & the checksum check out, TGT = valid. The data in the TGT is effectively copied to create the TGS ticket.

4. The TGS is encrypted using the target service accounts’ NTLM password hash and sent to the user (TGS-REP).

5.The user connects to the server hosting the service on the appropriate port & presents the TGS (AP-REQ). The service opens the TGS ticket using its NTLM password hash.

6. If mutual authentication is required by the client (think MS15-011: the Group Policy patch from February that added UNC hardening).

Unless PAC validation is required (rare), the service accepts all data in the TGS ticket with no communication to the DC.

Any user authenticated to Active Directory can query for user accounts with a Service Principal Name (SPN). This enables an attacker with access to a computer on the network to identify all service accounts supporting Kerberos authentication and what they are used for. Each SPN starts with a SPN type which is the first part of the SPN. If the SPN is “MSSQLSvc/adsmsDB01.adsecurity.org:1433”, then “MSSQLSvc” is the SPN type. We can check the ADSecurity.org SPN directory and see it’s for Microsoft SQL Server. The second part (after the forward slash /) is the server name the Kerberos service is running on. The server name can be the FQDN or the short name (often both). Sometimes there’s a colon (“:”) at the end which provides additional information, such as a port number or SQL instance. Anyone can perform “SPN Scanning” in order to identify Kerberos service SPNs registered in an Active Directory forest.

Attackers are most interested in Service Accounts that are members of highly privileged groups like Domain Admins. A quick way to check for this is to enumerate all user accounts with the attribute “AdminCount” equal to ‘1’. I cover AdminCount in an earlier post (“Active Directory Recon Without Admin Rights“). This means an attacker may just ask AD for all user accounts with a SPN and with AdminCount=1.

Once we have this data, we can filter further to identify the Service Accounts.

Another method to finding interesting Service Accounts is to filter based on SPN type. Some SPNs tend to have interesting permissions:

This attack involves requesting a Kerberos service ticket(s) (TGS) for the Service Principal Name (SPN) of the target service account (Step #3 above). This request uses a valid domain user’s authentication ticket (TGT) to request one or several service tickets for a target service running on a server. 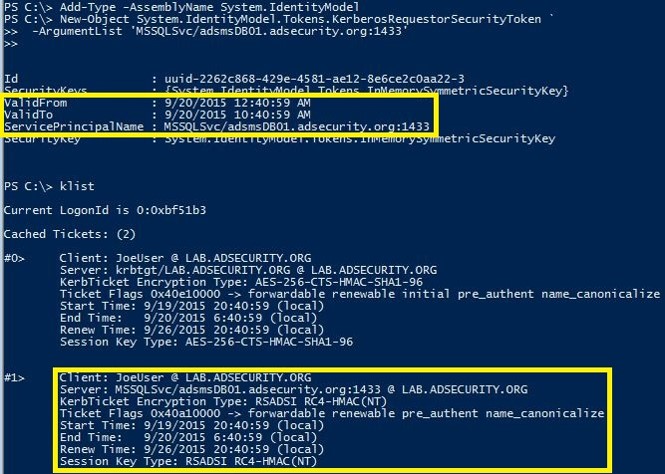 The next step is exporting the Kerberos ticket we just requested from memory, which can be done easily with Mimikatz (without admin rights).

Kerberoast can attempt to open the Kerberos ticket by trying different NTLM hashes and when the ticket is successfully opened, the correct service account password is discovered. The Domain Controller doesn’t track if the user ever actually connects to these resources (or even if the user has access), so a user can request hundreds of service tickets, even if they never actually connect to the service.

Note: No elevated rights are required to get the service tickets and no traffic is sent to the target.

Note that Mimikatz is not required to extract the service ticket from memory: read Will’s post “Kerberoasting without Mimikatz”

Before having a chance to detect Kerberoasting, it’s important to have the appropriate logging enabled.

Event ID 4769 will be logged many, many times in the domain since after initial logon (and Kerberos TGT ticket request), users request Kerberos TGS service tickets to access the may services on the network (file shares, SQL, SharePoint, etc). Expect there will be around 10 to 20 Kerberos TGS requests per user every day. The 4769 event on Domain Controllers is one of the most numerous in any environment which is why it’s often not logged. 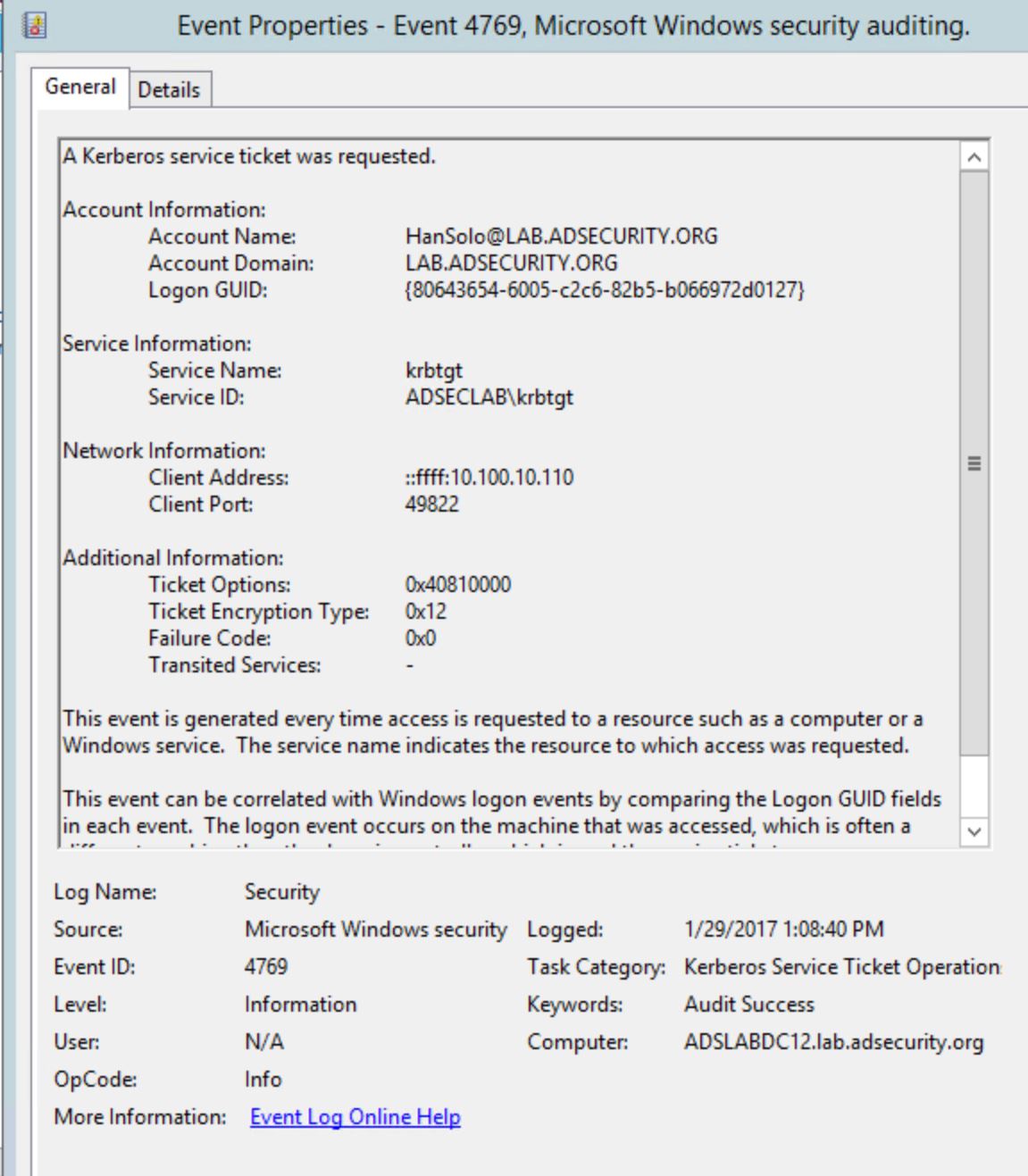 I have presented and posted on potential methods to detect Kerberoasting activity in the past:

Detection is a lot tougher since requesting service tickets (Kerberos TGS tickets) happens all the time when users need to access resources.
Looking for TGS-REQ packets with RC4 encryption is probably the best method, though false positives are likely.

Windows added Kerberos AES (128 & 256) encryption starting with Windows Server 2008 and Windows Vista which means that most Kerberos requests will be AES encrypted with any modern Windows OS. Any Kerberos RC4 tickets requested should be the exception. There are systems that only support Kerberos RC4 by default (NetApp). Inter-forest Kerberos tickets also use RC4 unless configured for AES – ensure your forest trusts support AES and then enable AES over the trust.

So, how do we determine what encryption type was used when looking at events: 0x12, 0x17…?

Ned Pyle (@NerdPyle) posted an article on hunting down the use of Kerberos DES encryption in the AskDS Blog on TechNet and provides this handy chart: 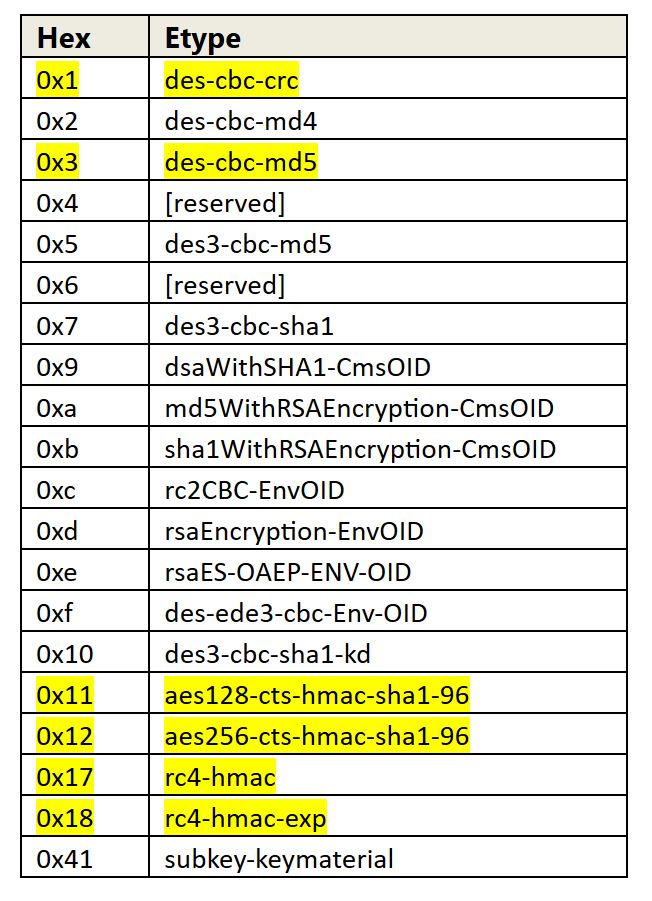 Once all Domain Controllers are configured to log 4769 events, these events need to be filtered before sending the data into a SIEM/Splunk. Since we are only really interested in Kerberos TGS service tickets with RC4 encryption, it’s possible to filter the events. As shown above, Kerberos events with AES encryption has Ticket Encryption Type set to 0x12.
Kerberos RC4 encrypted tickets have Ticket Encryption Type set to 0x17.

These events can be filtered using the following which greatly reduces the amount of events flowing into the SIEM/Splunk:

With this information, we can start investigating potential Kerberoasting activity and reduce the number of 4769 events.

Note:
Also look for Kerberos DES encryption since this is not secure. The ticket options may be different, so just filter on 4768 & 4769 events with Ticket Encryption: 0x1 OR 0x2 OR 0x3. Starting with Windows 7 & Windows Server 2008 R2, DES encryption is disabled, but it’s still important to find systems that may be attempting (& succeeding!) to get DES Kerberos tickets

We can further reduce the number of 4769 events that flow into SIEM/Splunk:

Here’s a 4769 event that may potentially be from Kerberoasting activity: 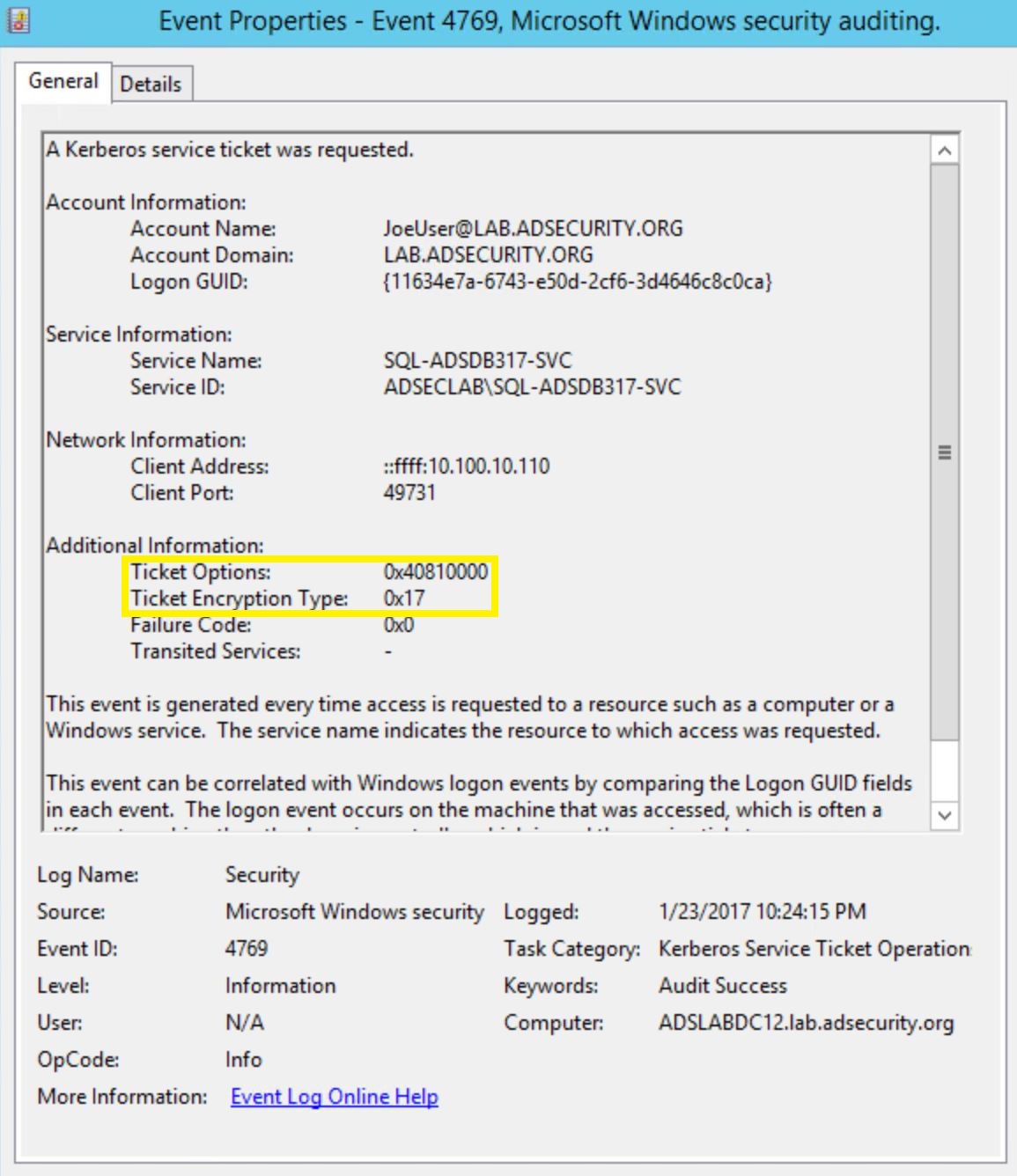 Some attackers will request a bunch of RC4 TGS tickets for some or all service accounts using something similar to the following graphic. 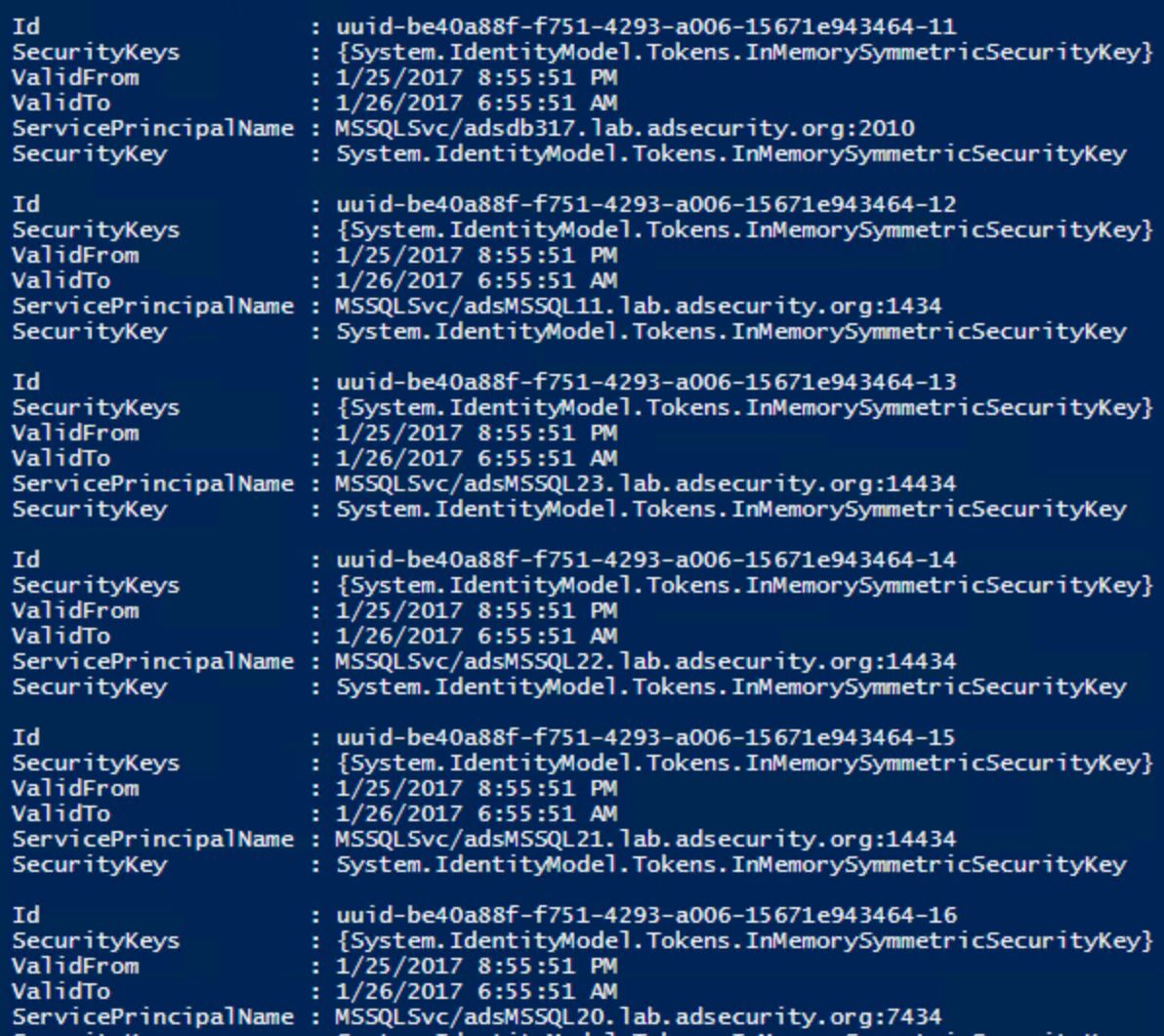 Running klist shows the tickets are in user memory. Note that the initial krbtgt ticket is AES encrypted and others are RC4-HMAC(NT). That’s a bit unusual. 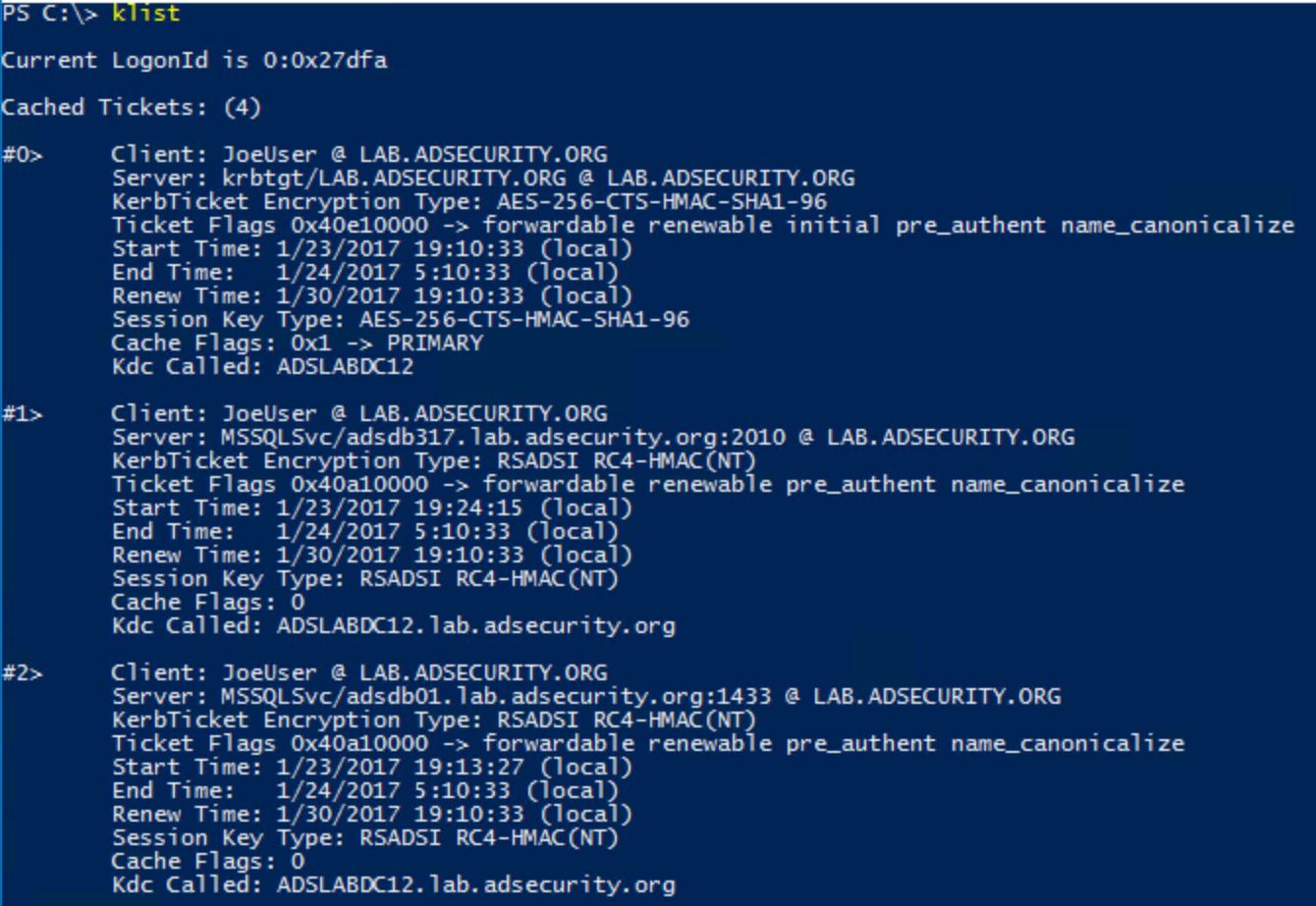 So, the tickets were requested… How to discover this activity?
Using the information regarding ticket encryption type and ticket options, we can use PowerShell to parse the DC’s event log looking for 4769 events with this info.

That looks really odd. Why would any account request several different service names (Citrix PVS, BizTalk, Business Objects, AGPM GPO management, and several SQL service accounts) within a second or two of each other?

That stands out and looks really suspicious and is very likely Kerberoasting activity. This provides great information on what users could be compromised and what activity on which computers should be scrutinized.

A single user requesting RC4 encrypted TGS tickets for several services, such as lots of SQL service principal names is suspicious and it’s worth investigating the IP (client address)  the requests came from. The same thing is true for multiple RC4 encrypted TGS requests over time for lots of service principal names. A pattern does emerge when there’s one or two accounts that request a variety or RC4 TGS tickets. 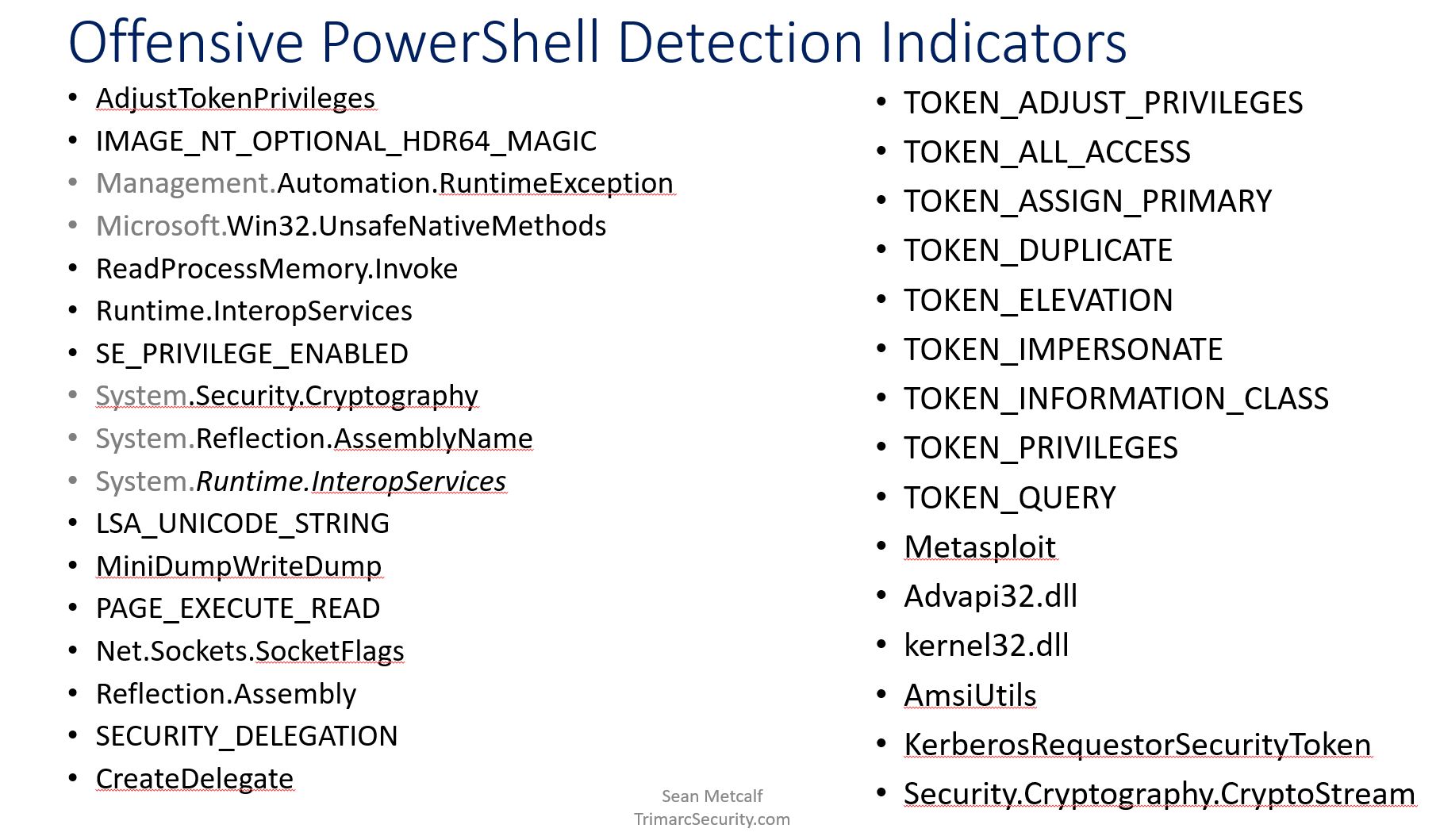 Note the addition of “KerberosRequestorSecurityToken” which is the PowerShell method to request Kerberos tickets.