At Black Hat and DEF CON this year, I spoke about ways attackers go from Domain User to Domain Admin in modern enterprises.

Every Windows computer has a built-in Administrator account with an associated password. Changing this password is a security requirement in most organizations, though the method for doing so is not straight-forward. A standard method is to use Group Policy to set the local Administrator password across a large number of workstations. A major issue with this is that all of the computers have the same local Administrator password. Windows is extremely helpful when it comes to local accounts since if two (or more) computers have the same local account name and password, Windows will authenticate the account as if it is local, meaning that by gaining knowledge of the administrator credential on one system, the attacker can gain admin access to all of them (that have the same local administrator credentials).

One of these methods is mining SYSVOL for credential data.

SYSVOL is the domain-wide share in Active Directory to which all authenticated users have read access. SYSVOL contains logon scripts, group policy data, and other domain-wide data which needs to be available anywhere there is a Domain Controller (since SYSVOL is automatically synchronized and shared among all Domain Controllers). 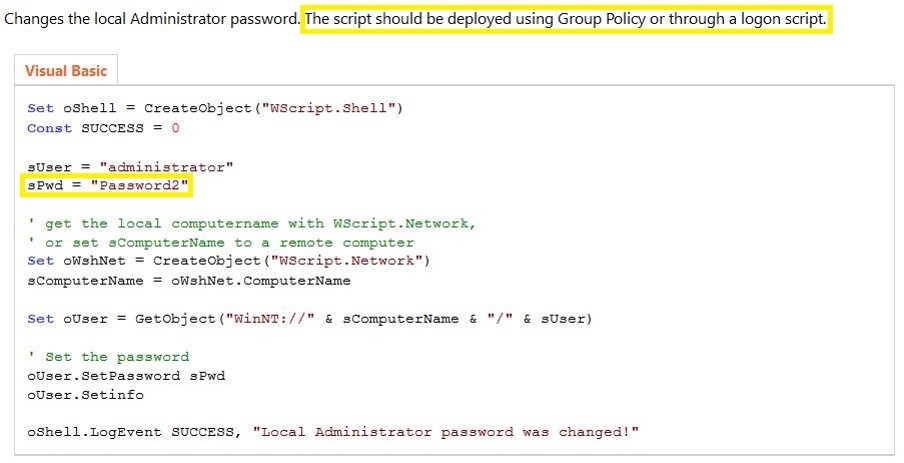 Please don’t use this script to change the local Administrator password.

That’s very helpful for administrators since it provides an automated mechanism for what previously required a custom solution such as a script. It provides useful capability to leverage Group Policy to “deploy” scheduled tasks with explicit credentials and change the local admin passwords on large numbers of computers at once – probably the two most popular usage scenario.

The question at this point should be: how is the credential data protected?

When a new GPP is created, there’s an associated XML file created in SYSVOL with the relevant configuration data and if there is a password provided, it is AES-256 bit encrypted which should be good enough…

Except at some point prior to 2012, Microsoft published the AES private key on MSDN which can be used to decrypt the password. Since authenticated users (any domain user or users in a trusted domain) have read access to SYSVOL, anyone in the domain can search the SYSVOL share for XML files containing “cpassword” which is the value that contains the AES encrypted password.

With access to this XML file, the attacker can use the AES private key to decrypt the GPP password. The PowerSploit function Get-GPPPassword is most useful for Group Policy Preference exploitation. The screenshot here shows a similar PowerShell function encrypting the GPP password from an XML file found in SYSVOL.

Oddvar Moe notes a quick way to search for these:

From what I can find, the issues with GPP credentials was first written about by Emilien Gauralt in the post “Exploiting Windows 2008 Group Policy Preferences” in January 2012. Unfortunately the link is dead and the content offline. A few months later in May, Chris Campbell – wrote the article “GPP Password Retrieval with PowerShell” as well as the first PowerShell code to exploit this issue. Chris later updated the PowerShell code and added Get-GPPPassword to PowerSploit. About a month later, in June, “Rewt dance” posted a GPP exploitation expanded reference (link offline – google cached version). I also recently discovered Alexandre Herzog’s post “Exploit credentials stored in Windows Group Policy Preferences” (dated April 2012).

I have written about the problems with credentials in Group Policy Preferences and the GPP patch (KB2962486).

I continue to find administrative credentials (including Domain Admin credentials) in Group Policy Preference XML files in SYSVOL, especially for scheduled tasks running under the context of admin accounts.

The obvious question for defenders is how to protect against this?

Microsoft released a patch in May 13, 2014 : “MS14-025 Vulnerability in GPP could allow elevation of privilege” (KB2962486). This patch needs to be installed on all systems that administer Group Policy using the Remote Server Administration Tools (RSAT). This patch prevents admins from putting password data into a Group Policy Preference. 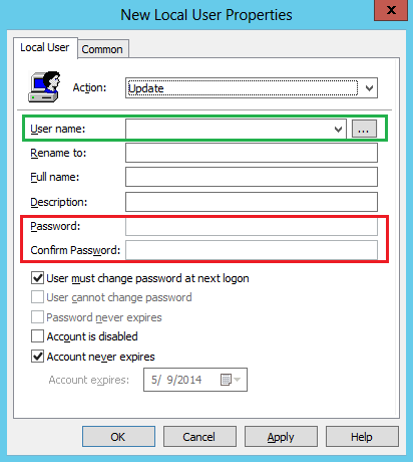