Active Directory Security Risk #101: Kerberos Unconstrained Delegation (or How Compromise of a Single Server Can Compromise the Domain)

At Black Hat USA 2015 this summer (2015), I spoke about the danger in having Kerberos Unconstrained Delegation configured in the environment.

When Active Directory was first released with Windows 2000 Server, Microsoft had to provide a simple mechanism to support scenarios where a user authenticates to a Web Server via Kerberos and needs to update records on a back-end database server on behalf of the user. This is typically referred to as the “Kerberos double-hop issue” and requires delegation in order for the Web Server to impersonate the user when modifying database records. 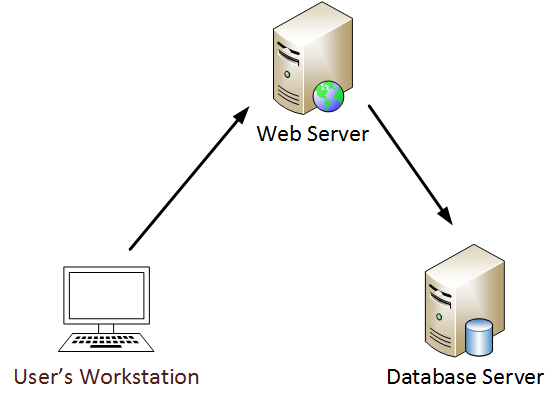 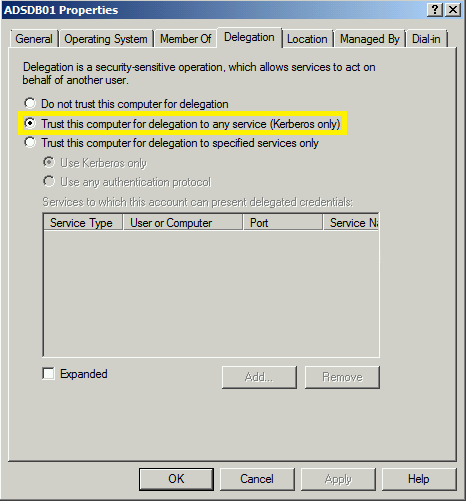 1a. Password converted to NTLM hash, a timestamp is encrypted with the hash and sent to the KDC as an authenticator in the authentication ticket (TGT) request (AS-REQ).
1b. The Domain Controller (KDC) checks user information (logon restrictions, group membership, etc) & creates Ticket-Granting Ticket (TGT).

2. The TGT is encrypted, signed, & delivered to the user (AS-REP).Only the Kerberos service (KRBTGT) in the domain can open and read TGT data

3. The User presents the TGT to the DC when requesting a Ticket Granting Service (TGS) ticket (TGS-REQ). The DC opens the TGT & validates PAC checksum – If the DC can open the ticket & the checksum check out, TGT = valid. The data in the TGT is effectively copied to create the TGS ticket

4. The TGS is encrypted using the target service accounts’ NTLM password hash and sent to the user (TGS-REP).

5. The user connects to the server hosting the service on the appropriate port & presents the TGS (AP-REQ). The service opens the TGS ticket using its NTLM password hash.

When Kerberos Unconstrained Delegation is enabled on the server hosting the service specified in the Service Principal Name referenced in the TGS-REQ (step 3), the Domain Controller the DC places a copy of the user’s TGT into the service ticket. When the user’s service ticket (TGS) is provided to the server for service access, the server opens the TGS and places the user’s TGT into LSASS for later use. The Application Server can now impersonate that user without limitation!

NOTE: In order for an application server to be configured with “Kerberos Unconstrained Delegation”, a Domain or Enterprise Admin needs to configure this setting on the computer account in the domain. This permission can be delegated to other groups, so be careful who has this right in Active Directory. 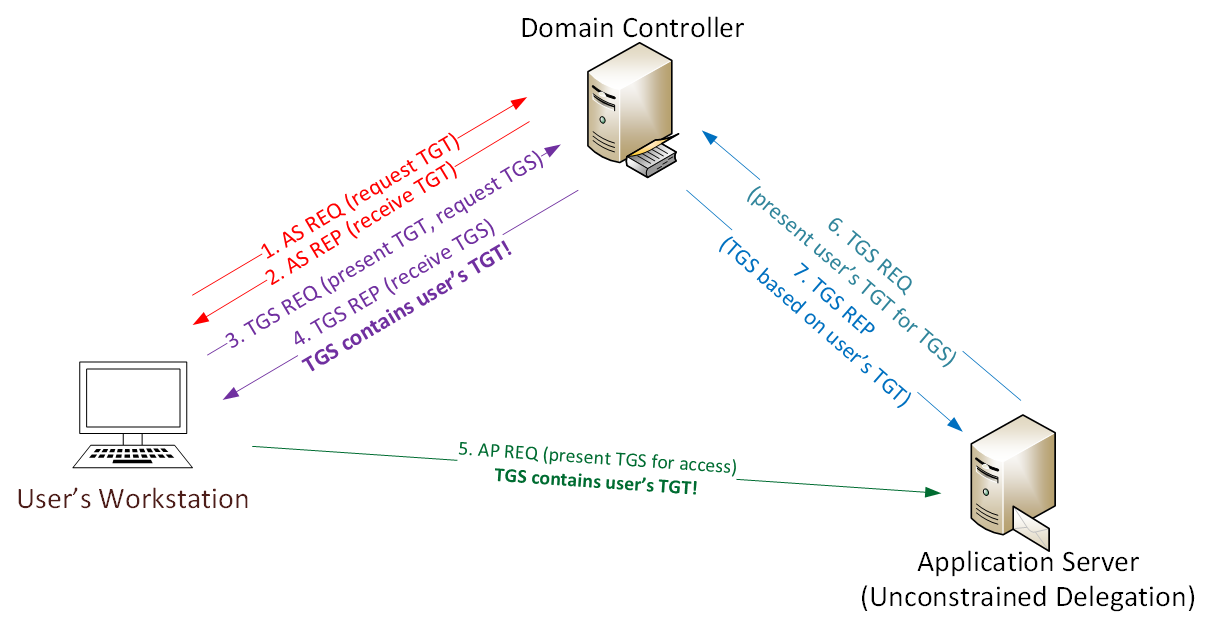 As an attacker, once you have found a server with Kerberos Unconstrained Delegation, what’s next?

When the admin connects to this service, the admin’s TGS service ticket (with the TGT) is delivered to the server and placed into LSASS in case it’s needed later.

The Domain Admin’s authentication (TGT) ticket can be extracted and re-used (until the ticket lifetime expires).

No need to wait though, the ticket can be used immediately in order to get the domain KRBTGT account password hash (when a Domain Admin is compromised).
In this case we use PowerShell remoting to connect to a Domain Controller as the Domain Admin.

When Windows 8.1 devices are connecting to Windows Server 2012 R2 hosts