NOTE:
While this page will remain, the majority of the Mimikatz information in this page is now in the “Unofficial Mimikatz Guide & Command Reference” which will be updated on a regular basis.

Mimikatz is the latest, and one of the best, tool to gather credential data from Windows systems. In fact I consider Mimikatz to be the “swiss army knife” of Windows credentials – that one tool that can do everything. Since the author of Mimikatz, Benjamin Delpy, is French most of the resources describing Mimikatz usage is in French, at least on his blog. The Mimikatz GitHub repository is in English and includes useful information on command usage.

Mimikatz is a Windows x32/x64 program coded in C by Benjamin Delpy (@gentilkiwi) in 2007 to learn more about Windows credentials (and as a Proof of Concept). There are two optional components that provide additional features, mimidrv (driver to interact with the Windows kernal) and mimilib (AppLocker bypass, Auth package/SSP, password filter, and sekurlsa for WinDBG). Mimikatz requires administrator or SYSTEM and often debug rights in order to perform certain actions and interact with the LSASS process (depending on the action requested).

After a user logs on, a variety of credentials are generated and stored in the Local Security Authority Subsystem Service, LSASS, process in memory. This is meant to facilitate single sign-on (SSO) ensuring a user isn’t prompted each time resource access is requested. The credential data may include NTLM password hashes, LM password hashes (if the password is <15 characters), and even clear-text passwords (to support WDigest and SSP authentication among others. While you can prevent a Windows computer from creating the LM hash in the local computer SAM database (and the AD database), though this doesn’t prevent the system from generating the LM hash in memory.

The majority of Mimikatz functionality is available in PowerSploit (PowerShell Post-Exploitation Framework) through the “Invoke-Mimikatz” PowerShell script which “leverages Mimikatz 2.0 and Invoke-ReflectivePEInjection to reflectively load Mimikatz completely in memory. This allows you to do things such as dump credentials without ever writing the mimikatz binary to disk.”  Mimikatz functionality supported by Invoke-Mimikatz is noted below.

Benjamin Delpy posted an Excel chart on OneDrive (shown below) that shows what type of credential data is available in memory (LSASS), including on Windows 8.1 and Windows 2012 R2 which have enhanced protection mechanisms reducing the amount and type of credentials kept in memory.

One of the biggest security concerns with Windows today is “Pass the Hash.” Simply stated, Windows performs a one-way hash function on the user’s password and the result is referred to as a “hash.” The one-way hash algorithm changes the password in expected ways given the input data (the password) with the result being scrambled data that can’t be reverted back to the original input data, the password. Hashing a password into a hash is like putting a steak through a meat grinder to make ground beef – the ground beef can never be put together to be the same steak again. Pass the Hash has many variants, from Pass the Ticket to OverPass the Hash (aka pass the key).

The following quote is a Google Translate English translated version of the Mimikatz website (which is in French).

Contrary to what could easily be imagined, Windows does not use the password of the user as a shared secret, but non-reversible derivatives: LM hash, NTLM, DES keys, AES … According to the protocol, the secret and the algorithms used are different:

Since Windows encrypts most credentials in memory (LSASS), they should be protected, but it is a type of reversible encryption (though creds are in clear-text). Encrypt works with LsaProtectMemory and decrypt with LsaUnprotectMemory.

Items in bold denotes functionality provided by the PowerSploit Invoke-Mimikatz module with built-in parameters. Other mimikatz commands may work using the command parameter.

The primary command components are sekurlsa, kerberos, crypto, vault, and lsadump.
Sekurlsa interacts with the LSASS process in memory to gather credential data and provides enhanced capability over kerberos.

The Mimikatz kerberos command set enables modification of Kerberos tickets and interacts with the official Microsoft Kerberos API. This is the command that creates Golden Tickets. Pass the ticket is also possible with this command since it can inject Kerberos ticket(s) (TGT or TGS)  into the current session. External Kerberos tools may be used for session injection, but they must follow the Kerberos credential format (KRB_CRED).
Mimikatz kerberos also enables the creation of Silver Tickets which are Kerberos tickets (TGT or TGS) with arbitrary data enabling AD user/ group impersonation.

The key required for ticket creation depends on the type of ticket being generated:

Crypto enables export of certificates on the system that are not marked exportable since it bypasses the standard export process.

These caches are located in the registry at the location HKEY_LOCAL_MACHINE\SECURITY\Cache (accessible SYSTEM).
These entries are encrypted symmetrically, but we find some information about the user, as well as sufficient to verify the hash authentication.

Further down is a more detailed list of mimikatz command functionality.

Contrary to what could easily be imagined, Windows does not use the password of the user as a shared secret, but non-reversible derivatives: LM hash, NTLM, DES keys, AES …

Authentication via Kerberos is a tad different. The client encrypts a timestamp from its user secret, possibly with parameters realm and iteration number sent from the server.
If the secret is correct, the server can decrypt the timestamp (and the passage verify that the clocks are not too time-shifted).

Yes, the RC4 key type available and enabled by default in XP 8.1 is our NT hash!

Since service tickets are identical in format to TGTs albeit with a different service name, all you need to do is specify a different service name and use the RC4 (NTLM hash) of the account password (either the computer account for default services or the actual account) and you can now issue service tickets for the requested service.  Note:  You can also use the AES keys if you happen to have them instead of the NTLM key and it will still work 😉

It is worth noting, that services like MSSQL, Sharepoint, etc will only allow you to play with those services.  The computer account will allow access to CIFS, service creation, and a whole host of other activities on the targeted computer.  You can leverage the computer account into a shell with PSEXEC and you will be running as system on that particular computer.  Lateral movement is then a matter of doing whatever you need to do from there 🙂
http://passing-the-hash.blogspot.com/2014/09/pac-validation-20-minute-rule-and.html 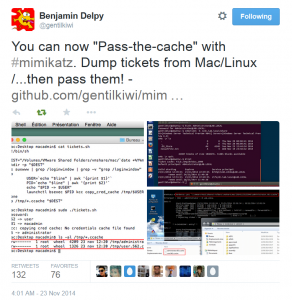