Microsoft Enhanced Mitigation Experience Toolkit (EMET) v5 security technology which I outlined in a previous post has several protection methods which will be detailed here. According to my sources at Microsoft 😉, EMET can be installed on workstations and servers (testing is always highly recommended before placing in production). Given the tremendous security improvements when installed, it is recommended for all Windows systems on the network.

It’s a good thing that EMET v5 is out now since several of the protections in EMET v4 have been bypassed.

The 4 recommendations from the Bromium whitepaper (Bypassing EMET 4.1):

It seems like Microsoft has incorporated fixes in EMET 5 to mitigate the issues discovered with version 4.1.

Attack Surface Reduction (ASR)
The ASR is a mechanism to block the usage of a specific modules or plug-ins within an application. For example, you can configure EMET 5.0 to prevent Microsoft Word from loading the Adobe Flash Player plug-in, or, with the support of security zones, you can use EMET 5.0 to prevent Internet Explorer from loading the Java plug-in on an Internet Zone website while continuing to allow Java on Intranet Zone websites.

During the preview period we have performed several tests and collected your feedback to finalize the default configuration for this mitigation. We aimed at having a configuration that provided security, and at the same time, did not limit the user experience with the applications protected by EMET 5.0. By default, EMET 5.0 is configured to block some modules and plug-ins from being loaded by Internet Explorer while navigating to websites belonging to the Internet Zone, and to also block the Adobe Flash plug-in from being loaded by Microsoft Word, Excel, and PowerPoint. We have chosen modules that are commonly used in certain exploitation scenarios, but like all EMET features and mitigations, the ASR is completely configurable to satisfy everybody’s needs and to be tailored to specific systems’ requirements.

Export Address Table Filtering Plus (EAF+)
The EAF+ starts by the same concept as the existing Export Address Table Filtering (EAF) mitigation, but it amplifies its scope and robustness. During the Technical Preview, we have presented the EAF+ as an extension to the EAF. During the last couple of months we have made several improvements to it, and we decided that it should be a new mitigation on its own.

As already mentioned in the Technical Preview blog post, when EAF+ is enabled it adds the following additional safeguards:

64-bit Return Oriented Processing (ROP) mitigations
Many ROP mitigations are now available also for 64-bit processes: Deep Hooks, Stack Pivot, Load Library, and MemProt. Although we have not yet detected exploits that use ROP techniques to exploit 64-bit applications, we decided to extend the anti-ROP mitigations to this architecture to be ready when the time comes.

Strict checks for Certificate Trust rules
The Certificate Trust’s pinning rules can now be configured with a more aggressive “blocking” mode (not enabled by default), so that EMET 5.0 can force Internet Explorer to terminate the SSL connection without sending session data instead of just detecting the untrusted certificate.

EMET Service
We have added a new service, called EMET Service, which is taking in charge many duties that EMET Agent used to do in previous versions. The EMET Service, among other things, takes care of evaluating the Certificate Trust rules, appropriately dispatching EMET Agents in every user’s instance, and automatically applying Group Policy settings pushed through the network. Also, a service offers more resiliency and better ability to being monitored.

Hardening and better application compatibility
We have seen a technique to potentially bypass some of the EMET 4 mitigations. This technique is possible when a memory corruption within an EMET-protected application can be abused to overwrite selected memory areas and corrupt data belonging to EMET itself. We have also seen techniques aiming at disabling the EAF mitigation by invoking some specific API calls. In EMET 5.0 we worked to harden against potential bypass techniques.
We also refactored many components of the EMET 5.0 engine, in order to maximize application compatibility, also with some popular anti-malware products, and reduce potential false-positives. 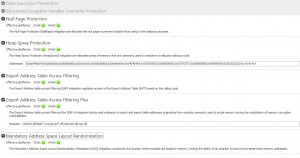 In a previous blog post series we went into detail on what DEP is and how it works[part 1, part 2].  In summary, the purpose of DEP is to prevent attackers from being able to execute data as if it were code.  This stops an attacker from being able to directly execute code from the stack, heap, and other non-code memory regions.  As such, exploitation techniques like heap spraying (of shellcode) or returning into the stack are not immediately possible.

The effectiveness of DEP hinges on the attacker not being able to 1) leverage code that is already executable or 2) make the attacker’s data become executable (and thus appear to be code).  On platforms without ASLR (that is, versions of Windows prior to Windows Vista), it is often straightforward for an attacker to find and leverage code that exists in modules (DLLs and EXEs) that have been loaded at predictable locations in the address space of a process.  Return-oriented programming (ROP) is perhaps the most extensive example of how an attacker can use code from loaded modules in place of (or as a stepping stone to) their shellcode [3,1].  In addition to loaded modules, certain facilities (such as Just-In-Time compilers) can allow an attacker to generate executable code with partially controlled content which enables them to embed shellcode in otherwise legitimate instruction streams (“JIT spraying”)[2].

The fact that modules load at predictable addresses without ASLR also makes it possible to turn the attacker’s data into executable code.  There are a variety of ways in which this can be accomplished, but the basic approach is to use code from loaded modules to invoke system functions like VirtualAlloc or VirtualProtect which can be used to make the attacker’s data become executable.

Summary: DEP breaks exploitation techniques that attackers have traditionally relied upon, but DEP without ASLR is not robust enough to prevent arbitrary code execution in most cases.
Source: Microsoft Security Research and Defense Blog

This mitigation performs Structured Exception Handler (SEH) chain validation and breaks SEH overwrite exploitation techniques.  Take a look at the following SRD blog post for more information on what these exploits are and how they are blocked. View post here. [Implemented in Windows since Windows Vista SP1]
Source: What’s EMET and How Can You Benefit (Windows Blog) 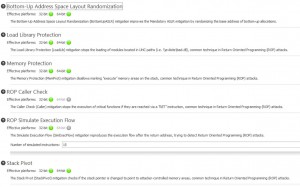 Following is a summary of what these advanced mitigations are:

Anti detours: Some exploits attempt to evade the hooks by executing a copy of the hooked function prologue and then jump to the function past the prologue. With “Anti detours” option enabled, common shellcode using this technique are not effective.

Banned functions: By enabling this option, additional APIs, configured in a list, will be blocked when used. In this version only ntdll!LdrHotPatchRoutine is configured to mitigate potential exploits abusing this API.

EMET logs to the Application Event Log in Windows for activity review. 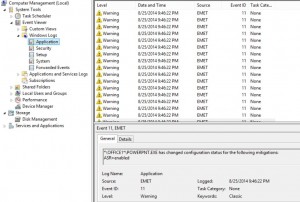