As noted in previous posts on MS14-068, including a detailed description, a Kerberos ticket with an invalid PAC checksum causes an unpatched Domain Controller to accept invalid group membership claims as valid for Active Directory resources. The MS14-068 patch modifies KDC Kerberos signature validation processing on the Domain Controller.

This issue is FAR worse than the Kerberos “Golden Ticket” issue since an attacker doesn’t need the domain Kerberos service account (KRBTGT) NTLM password hash (only accessible from a Domain Controller with domain-level admin privileges) for exploit. The attacker simply modifies the existing TGT by changing the group membership to have access to everything in Active Directory and creates a specific invalid checksum for the PAC signature causing the DC to validate it.

If you haven’t installed the MS14-068 patch (released on November 18th, 2014), the exploit code is now available for all to use. Microsoft KB3011780 patches this issue.
Patch your Domain Controllers Now!

UPDATE: I have successfully tested this MS14-068 exploit in my lab and posted detailed information on how to exploit Kerberos on vulnerable Domain Controllers including WireShark pcaps and DC event logs.

Sylvain Monné tweeted about his Python code (Python Kerberos Exploitation Kit aka PyKEK) late Thursday, December 4th, stating it can be used to exploit the Kerberos vulnerability patched in MS14-068. 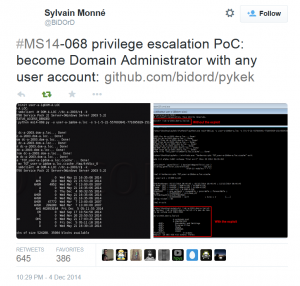 The POC is now in MetaSploit.

According to the PyKEK documentation, the modified TGT now has the following groups included:

Since the TGT is signed by the KDC Service (KRBTGT domain account), it is valid and can be used to access Active Directory resources based on the group membership (which was forged and now validated by the DC).

At this point, one can use Mimikatz to use the new TGT to connect to resources.

Two commands are all that’s necessary to exploit:

The bar is fairly low in order to exploit MS14-068. Effectively admin rights on a single domain-joined computer is all that’s needed. The other items aren’t that difficult once this access is attained.