PowerShell version 5 is RTM (As of 12/18/2015). Prior to this there was a “production preview” available since August which means it was supported, but not final. With the final release of PowerShell v5 now available, I highly recommend you download PowerShell v5 and start testing to prepare for production deployment.

While the PowerShell v5 download was pulled previously due to an issue with PSModule Path, the Windows Management Framework (WMF) 5.0 RTM is available for download once again.

Microsoft provides the following PowerShell v5 benefits and updates on the download site:

There are several compelling PowerShell v5 security features that make it a must deploy (IMHO). I presented on several of these at security conferences in 2015.

These security features include:

Since many PowerShell attacks obfuscate the attack code, it is difficult to identify what the script code does. Script block logging de-obfucates the code and logs the code that is executed. Since this code is logged, it can be alerted on when seen by a central logging system.

One key challenge with identifying offensive PowerShell code is that most of the time it is obfuscated (Base64, Base64+XOR, etc). This makes real-time analysis nearly impossible since there is no keyword to trigger alerts on.

Deep Script Block Logging records the content of the script blocks it processes as well as the generated script code at execution time.

The original script block passed to PowerShell for processing is logged (what you see above) as well as the actual command that PowerShell executed.

Note that Script Block Logging is enabled by default. 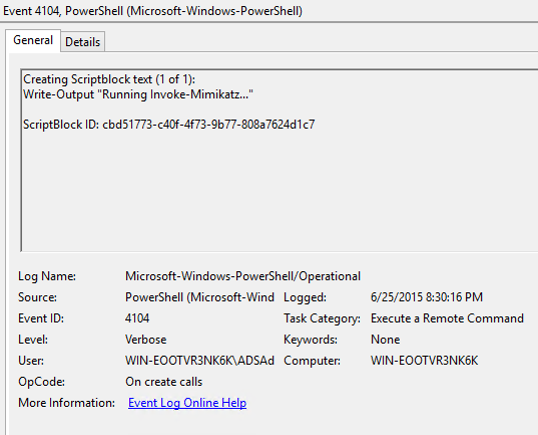 System-wide transcripting can be enabled via Group Policy and provides an “over the shoulder” transcript file of every PowerShell command and code block executed on a system by every user on that system. This transcript can be directed to a write-only share on the network for later analysis and SIEM tool ingesting.

PowerShell has the ability to save text written to the console (screen) in a “transcript” file which requires the user (or script) to run “start-transcript $FileName”. This provides a simple script log file. The drawback to this method is that only one transcript could be active at a time, the PowerShell ISE editor didn’t support transcripts, and that Start-Transcript would have to be added to every user’s PowerShell profile in order for a record of run commands to be saved.

System-wide transcripts provides a simple method to write all PowerShell commands (including those run inside scripts or downloaded from another location) into a computer-specific transcript file that is stored in a network share. This enables rapid analysis of near-real time PowerShell usage as well as identification of “known-bad” activity.

The system-wide transcript can be enabled via Group Policy and includes the following information in the header:

## Create the SMB Share, granting Everyone the right to read and write files. Specific
## actions will actually be enforced by the ACL on the file folder.
New-SmbShare -Name Transcripts -Path c:\Transcripts -ChangeAccess Everyone 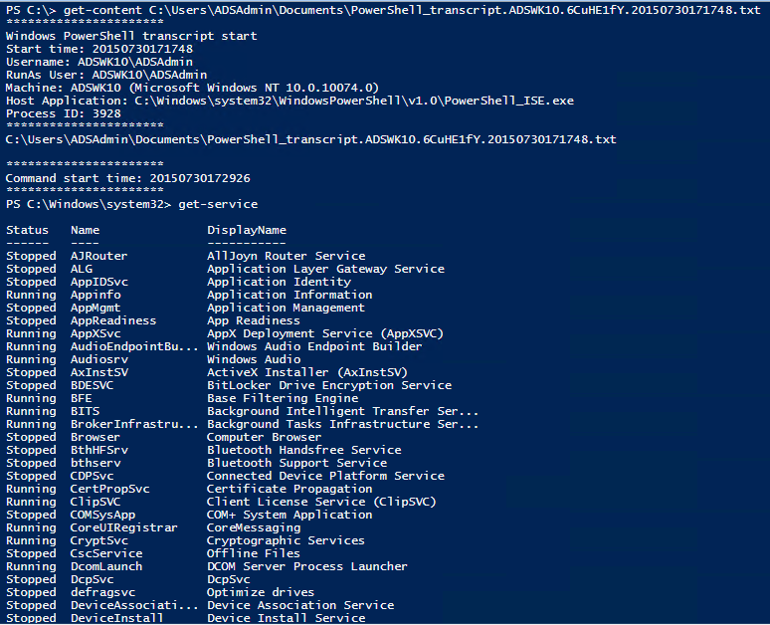 PowerShell supports several “language modes“. One of the more interesting language mode is “Constrained Language mode” which locks down PowerShell to basic functionality.

Note that scripts allowed by AppLocker policy such as enterprise signed code or in a trusted directory are executed in full PowerShell mode and not the Constrained PowerShell environment.

The new Windows 10 Antimalware Scan Interface (AMSI) enables all of the scripting engines (PowerShell, VBScript, and JScript) to request analysis of dynamic content, from a script file, typed commands at the command line, and even code downloaded and executed in memory. This enables scanning of PowerShell code before it is executed on the computer and is a potential game-changer when it comes to defending systems from offensive PowerShell code. When code is delivered to the PowerShell “engine” (System.Management.Automation.dll), it is sent to the AMSI for anti-malware checks. The anti-malware solution installed on the system needs to support AMSI in order for the code to be scanned. Windows Defender supports AMSI on Windows 10 out of the box. After scanning, if the AMSI returns a status OK, the code is executed. If it returns a negative, then the code is not executed.

This means that PowerShell attack code can be prevented from executing on Windows 10 computers, as long as the anti-virus/anti-malware solution supports the AMSI.

The Antimalware Scan Interface (AMSI) is a generic interface standard that allows applications and services to integrate with any antimalware product present on a machine. It provides enhanced malware protection for users and their data, applications, and workloads.

AMSI is antimalware vendor agnostic, designed to allow for the most common malware scanning and protection techniques provided by today’s antimalware products that can be integrated into applications. It supports a calling structure allowing for file and memory or stream scanning, content source URL/IP reputation checks, and other techniques.

AMSI also supports the notion of a session so that antimalware vendors can correlate different scan requests. For instance, the different fragments of a malicious payload can be associated to reach a more informed decision, which would be much harder to reach just by looking at those fragments in isolation.